Cashew came to India with the Portuguese and is a native of Brazil. It is the third-largest consumed tree nut in the world. The Indian soil favored this nut so well that India has been cultivating cashew nuts as a popular native crop, making this country the second largest cashew producer in the World. Therefore, listing those dealing in Indian cashew nuts among the leading cashew nuts exporters and suppliers.

The tropical climatic conditions have helped in cultivating cashew nuts along the eastern and western coastal stretch of India. As a matter of fact, over 60 percent of the cashews consumed globally are processed in India. Nutrichfoods is one of the prominent Indian cashew nuts manufacturers of processed cashews from India.

The cashew nut is a popular snack, and its rich flavor means that it is often eaten on its own, lightly salted or sugared. Cashew nuts are sold covered in chocolate, but due to their higher price compared to peanuts and almonds, cashews are not as common in candy except from higher-quality manufacturers.

We export in different grades of cashew nuts which refer to their size in numbers of Cashew nuts: WW240, WW320, SW320. In broken peace, we supply JH, LP, and SP respectively.

Being a trusted bulk cashew nuts exporter in india, we export quality cashew nuts from India. We maintain the quality of cashews by following food safety norms and stringent checks. Depending upon the customer specifications, we can offer cashew nuts in different weight requirements.

Cashew nuts also contain significant amounts of phytochemicals with antioxidant properties that protect the body from cancer and heart disease.

Nutrichfoods is one of the reliable cashew nuts exporters and suppliers and the first choice of many countries of the world. 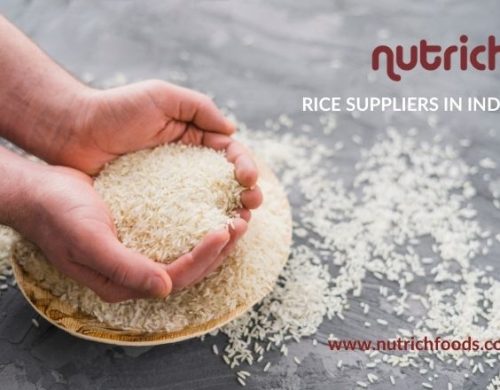 Rice is one of the most popular and extensively consumed staple foods. It is eaten up considerably in Asia and Africa...